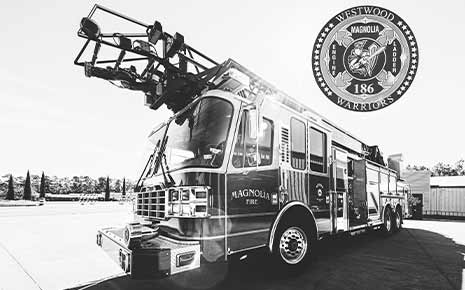 In 2013, the Magnolia Fire Chief approached the WMPID and explained that due to new high-rise construction (mainly apartments and a hotel), the Magnolia Fire department was facing a lowering of their ISO standards because of a lack of a ladder fire truck dedicated to the area in and around the WMPID. The lowering of the ISO standards would have increased both the commercial and residential fire insurance significantly. The chief faced with limited funds simply could not afford to buy a new or used ladder fire truck.

To prevent the erosion of the ISO standards in our area, the WMPID agreed to purchase a used but in great shape $350,000 ladder fire truck. The chief then had the truck repainted and refitted with all the required equipment and agreed to house the new ladder fire truck at the fire sub-station located close to the intersection of FM 1488 and FM 2978.  In addition, to the new fire ladder truck, the WMPID paid to have new fire hydrants added on the north side of FM1488 across from Westwood Village Shopping Center. These fire hydrants will provide quicker access to refill water tank fire trucks in the case of a large fire.

The WMPID believes that partnering with the Magnolia Fire Department in this way is a win/win for all parties involved.